The Opera Royal of Wallonie-Liège celebrates its 200th anniversary! Episode 03

1820-2020: the Opera celebrates its Bicentenary! Until the content of this exceptional event is revealed, the Opera invites you to retrace its 200 years of history. Each Friday, an episode will take you back in time.

The pediment of the Opera, a nod to ancient Greece

Since 1903, Apollo sits on the ceiling of the main room, just above your heads, thanks to the painter Emile Berchmans. A few years later, it was his brother Oscar, a sculptor, who also installed the divinity, but this time on the frontage. At first temporary in 1919, the pediment will take the form we know in 1930, allowing Apollo, god of the Arts, to also watch over the Cité ardente (Burning City) and to welcome you as soon as you enter.

At first, the Opera was in need of decoration on the frontage. It was in 1919, in preparation of the Armistice celebrations, that a vertical and triangular ornament, the pediment, similar to those of ancient Greek temples, was affixed above the entrance to the building. Made in plaster by Oscar Berchmans and his cousin Jules, the ephemeral decoration presents many ancient figures. But that’s not all ! Three statues are also erected, the main one, representing a draped woman standing on a globe and surrounded by two children, overlooks this pediment. At that time, Apollo was still not there!

Eleven years later, in 1930, on the occasion of the centenary of the independence of Belgium and the Liège International Exhibition, a series of new works was undertaken on the building. This time, Oscar, alone, is responsible for creating a new work echoing the provisional pediment of 1919.

He chooses to present two Olympian goddesses seated alongside a god … Divinity of light, music and singing, it is Apollo, equipped with a lyre, who appears on the frontage of the Royal Theater to illuminate visitors with its rays. To her right, Venus, an expression of love of beauty, caresses Cupid’s cheek. To his left, the reason for the creation and implementation of the Beautiful is illustrated with a thoughtful-looking Minerva.

The pediment both classic and modern by its shape and composition, blends perfectly with the building which, with its columns, draws a neoclassical style frontage paying homage to Antiquity and on which Apollo looks on the composer André Modeste Grétry. 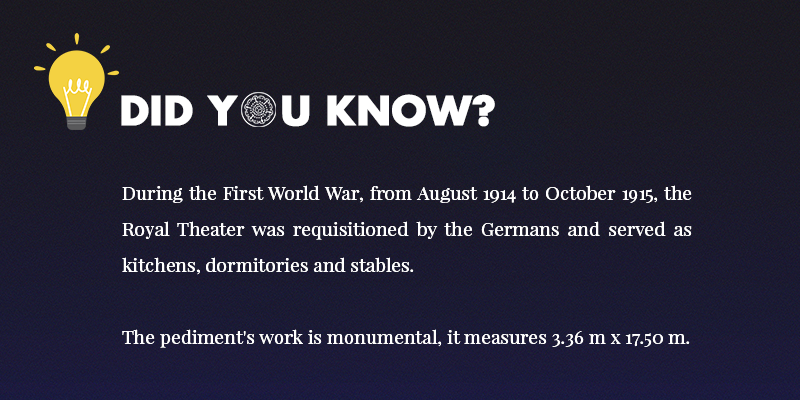 See you next week for a little trip around Grétry!

Launch of our Streaming offer !

Johann Strauss, the father, the son and the spirit of the waltz

The (En)chanted story of Lakmé

Singin' in the Rain Cancelled

Fridays at the Opera